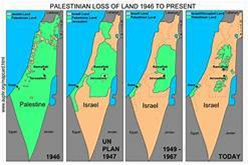 In the half century since the on-set of Israel’s second wave of land snatch begun in 1967, American presidents have followed a fairly rote policy of “freeze” and wait while Israel, imbued with blanket U.S. legislative cover and a limitless cheque book, found little reason to pause in increasing its “settler’’ population in the occupied territories from the 10,000 of 1967 to more than 600,000 … END_OF_DOCUMENT_TOKEN_TO_BE_REPLACED